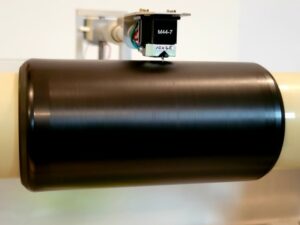 Since the earliest days of sound recording, engineers have been figuring out ways to duplicate and preserve their precious audio. In the 1890’s Thomas Edison developed the “pantograph” process, where one wax cylinder was dubbed to another by connecting primitive recorders with rubber tubing. The sound quality suffered in the transfer, and surviving examples confirm a great difference between the original cylinder and the copies made from it.

When recordings went electric in the 1920’s, the dubbing process was improved significantly, but was still far from perfect. Sound could be transferred from one record to another with greater fidelity, but the new recording contained any surface noise that was present on the original, while also adding new noise of its own. Nevertheless, electric dubbing made many scarce recordings available to wider audiences. Milt Gabler’s Commodore label and John Steiner’s Paramount reissue series released some fine dubs of rare, classic jazz in the 1930’s and ‘40’s.

By the late 1940’s tape recorders had become the standard for studio recording and archiving audio. Good quality reel-to-reel machines made it possible to copy older records with a minimum of added noise and with reasonable durability. Respectable tape-to-tape copies could also be made. Nevertheless they still introduced problems like wow and flutter, tape hiss, and susceptibility to magnetic fields. Even so, magnetic tape made editing and restoration of vintage material possible for the first time. Pioneers like the English audio guru John R. T. Davies made good use of the format, combining tape and outboard devices like equalizers to improve the sound of classic recordings.

The advent of digital recording in the 1980s changed everything. Digital recorders are basically computers that convert sound waves into numbers (zeros and ones) to be stored and converted back into sound waves later. This means that copying from one digital source to another does not degrade the sound in any way, as the zeros and ones will be the same no matter how many times they are copied. Even copies of copies are still exactly the same. Additionally, the digital process (arguably) introduces virtually no audible noise of its own, so what goes in is exactly what comes back out. And this is where modern-day sound restoration begins…

Once the initial transfer is made and the signal is “digitized,” it can then be manipulated in countless ways to remove noise and improve the audio quality. In the late 1980’s software developers such as CEDAR and Sonic Solutions created audio restoration programs that were able to effectively remove scratches, hiss and other anomalies from records and tapes, and did so quite well. Because of development costs, the software was very expensive and generally only within reach of major-label engineers and institutions. During that time, commercial releases of vintage material tended to show off the software more than the music, and engineers would often remove as much noise as possible without regard for the sensitive musical information that was being removed along with it. Consequently, many ‘80’s and ‘90’s digital reissues tend to have a dull, bland sound, void of any ambient content. Many of the musical high frequencies were interpreted by the software as “noise” and were also eliminated. Collectors who owned the original discs were used to hearing what the recordings actually sounded like, and the sterilized CD versions could not compete sonically.

It wasn’t until the late 1990’s that audio restoration software became affordable and available to a wider demographic. Private individuals and small record labels could finally try their hand at re-mastering vintage audio in the digital realm. Their work tended to be more of a labor of love, with more concern for preserving the original audio than for removing every last bit of record noise. Fortunately, this more balanced approach seems to have caught on, and vintage reissues sound better than ever, even with a bit of the original noise remaining. 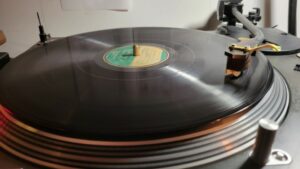