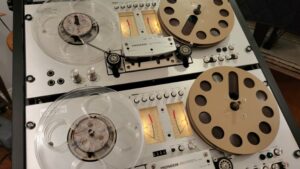 Magnetic tape was first developed in Germany in the 1930s as an alternative to discs, which offered only a few minutes of recording per-side, and wires, which suffered from low-fidelity sound and an inconvenient format. Tape offered superior sound, with the ability to fast-forward and rewind and make precise edits. The earliest magnetic tapes were made of paper coated with adhesive and iron oxide (a.k.a. rust) and were rather fragile. Eventually various types of plastic proved to be more durable and replaced paper as a base. After WWII tape recorders became common all over the world and continued to dominate the industry well into the 1990s. Many types of specialized tape decks were developed. Reel-to-reel audio tapes range in width from 1/4-inch to 2 inches, employ playback speeds from 1.75 to 30 inches per-second, and use track layouts ranging from single-track mono to 24-track multitrack. Needless to say, a single playback deck will not offer all the options needed to correctly transfer audio from the various types of reels that may be encountered.

By and large, 1/4-inch tapes are what were used in homes and early studios and represent >99% of the tapes that survive today. When preparing to transfer and digitize these, several things must be considered before just “plopping” that reel onto a deck and pressing the play button. Doing it wrong can result in major playback issues or even destruction of the tape.

Track layout/speed. How was this tape configured? Is it single-track mono or perhaps two-track stereo (a.k.a. half-track) running in only one direction? These were used primarily by studios and serious home audiophiles for mixdown and mastering, who preferred them due to the increased track width. There are also four-track single-direction tapes, used for initial tracking in many home studios and semi-pro facilities, usually to be mixed down to a two-track master. The most common layout by far is “four-track stereo” meaning the tape runs both directions with two tracks playing back in each direction. Commercially produced reel-to-reel tapes typically did it this way, with the material on the tape matching the A and B sides of the corresponding vinyl release. Once we get into home recordings though, the four-track format can get tricky. It is not uncommon to find home recorded tapes with multiple programs on the left and right channels, as these decks allowed mono recording on individual tracks, and at different speeds. For example, we might have a few minutes of Mama playing piano in stereo, recorded at 7.1/2 i.p.s; followed by Uncle Ralph telling a story on the left channel at 3.3/4 i.p.s. simultaneously with Junior’s band concert on the right channel at 1 7/8 i.p.s. This kind of thing happens more often than you might expect, as blank tape was expensive, and recordists tended to use what was available in the moment. In order to transfer these tapes properly and sort out the different programs, the mono/stereo/speed issues must be identified and corrected, and the correct playback deck must be used. (Playing a tape like this on a full-track or half-track machine will result in two programs being irreparably mixed together.)

Noise reduction. As technology progressed, two companies dominated the market with their noise-reduction units: Dolby and dbx. Both technologies were developed to deal with the same problem (tape hiss/noise) but did so in different ways. When we run across a tape that was encoded with either process, that tape must be decoded in the same way in order to reproduce properly. Failing to do so will result in an odd “pumping” effect, especially in the high frequencies. Further complicating things is the fact that there are 2 different types of dbx and 3 different types of Dolby, all of which must be decoded in their own proprietary way. Tapes should be checked before transfer, to determine if noise reduction was used, and if so, what type.

“Sticky-shed” and tape baking.  A common problem we encounter is “sticky-shed” syndrome, where the magnetic oxide layer has become gooey and partially detached from the plastic tape base, and can literally flake off during playback. This occurs largely on tapes with a polyester base (labeled “Mylar”) and can be a death knell for the recording if not dealt with properly.Tapes with sticky-shed must be baked for several hours to bind the oxide and the adhesive again, allowing the tape to be played back normally for a short period of time. Failure to do so can damage the tape and even the tape deck.

Wider tapes. Each tape width, speed and track configuration (1/4-2 inches // 1.75-30 inches per-second // 1-24-tracks) requires a different proprietary playback deck. The procurement and maintenance of these specialized machines can be cost-prohibitive. More decks are on the wish list…but at present Commodore is only equipped for 1/4” tapes, up to 4-tracks. If you need wider tapes transferred, we may be able to refer you to an appropriate facility. Luckily, more than 99% of the existing reel-to-reel tapes are in the 1/4” format, so give us a call and we’ll see what we can do for you!